LostChocolateLab Update
News Flash from the Future!
Wednesday, February 23, 2005
Quick Willie
Folks interested in checking out some partial Lab meanderings in Minneapolis will want to stop by the Southern Theater for this event featuring LCL Drummer and Willie August Project Co-Conspiritor Jeremy Hauer. (I hear there may be some pre-recorded LCL used as interludes for those of you interested in that angle)

TIX: $14 general;$10 student/senior
For reservations, call the Southern Theater at 612-340-1725, or visit www.southerntheater.org. For more information visit the NEWS section of this web site. 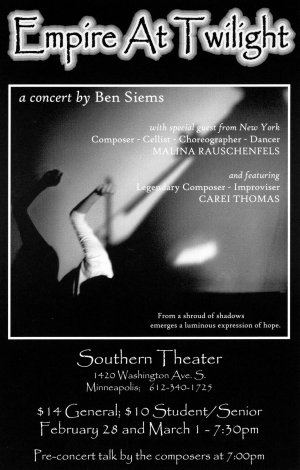 posted by dkmf at 1:42 PM 0 comments links to this post